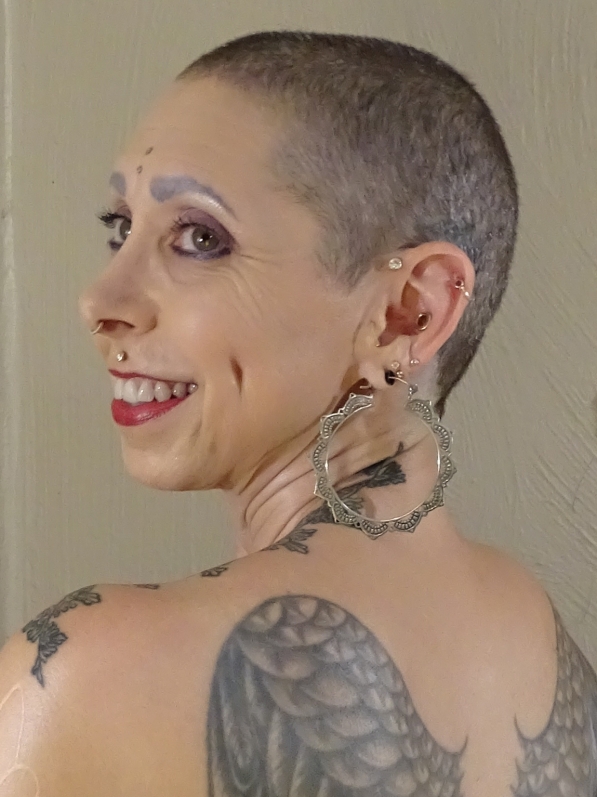 I’ve performed approximately 50,000 piercings since beginning my career as a professional in the 1980s, when I managed Gauntlet, the first piercing specialty studio in the United States. I’m the author of The Piercing Bible: The Definitive Guide to Safe Body Piercing, the first comprehensive, mainstream reference book on the subject.

My love for body art is still going strong! I live in the Yucatan in Mexico and travel to pierce by appointment on tours around the US. I work only in quality studios that meet the requirements of the Association of Professional Piercers. I am a proud Business Member at Large of the Association.

MY SPECIALTY- I specialize exclusively in genital piercings for women, men and others, as well as nipple piercings. I refer to my colleagues for other piercings.  Additionally, I offer online (photo) anatomy consultations and piercing problem consultations for any piercing on the ears, face, and body.

I began professionally piercing in the 1980s as Manager of the Gauntlet Enterprises store, in West Hollywood. When I launched my career there, it was still the only body piercing specialty studio in the United States. In fact, it was the first of its kind in the world! I also worked at their branches in San Francisco, and New York, and became Vice President of Southern California Operations, running mail-order and jewelry manufacturing divisions in addition to the piercing studio.

This was a period of tremendous growth and development in the piercing world, and a time of many "firsts" as we experimented with the possibilities of piercing the body. It was just before piercing started to become an industry, rather than just a single, highly unusual specialty shop! Some things worked better than others, and we pursued what was successful. During this era, nipples and genitals were the mainstays of our piercing work. Facial and ear piercings were far less popular than the more functional options. Navel piercings were virtually unheard of! And it is to my roots that I have returned. As far as I know, I'm the only professional piercer specializing exclusively in nipple and genital piercings for adults of all genders. I continue to tour regularly around the U.S., guest piercing at the studios of my colleagues, since I no longer have my own premises.

I received my honorary Master Piercer Certificate from my mentor and Gauntlet’s founder, Jim Ward, in December of 1992. It was the first such certificate issued by Gauntlet, and all the more an honor because it was granted after I announced my forthcoming departure from the company.

I then established my own piercing-only studio, Rings of Desire, Inc., in New Orleans. It was the French Quarter's only licensed body art business for over 12 years. It was also the first to receive a Commercial Body Art permit once the field became regulated. Rings of Desire closed in the aftermath of Hurricane Katrina, and I now reside in the peaceful paradise of Merida, Mexico, in the Yucatan.

In my earlier years I was employed as a Sign Language interpreter and worked in the medical field, as well as in the fashion industry. I am renowned for my lengthy professional piercing career and expertise in body piercing, as well as for my own extensive collection of body art.

Want to get pierced by Elayne Angel?

I am known as a pioneer in the field for innovating techniques, aftercare, and piercing placements. I am credited (by Jim Ward in his book, "Running the Gauntlet," BMEzine, Pain Magazine, and others) with the popularity of the tongue piercing; and inventing, naming, and popularizing a number of specific piercing placements including the fourchette, and lorum. I also perfected and popularized the triangle piercing.

Since 1996, I have been a member in good standing of the Association of Professional Piercers (APP), a non-profit health, safety, and education organization. In my ongoing involvement to advance the field and to promote safe piercing, I served a three-year term on the APP Board of Directors as Outreach Coordinator. Following that I was elected to a second term with the organization as Medical Liaison. After a three-year hiatus, I repeated another term in that same position. From June 2011 to June 2014, I served as the Association's President, and I remain a "Business Member at Large." I was honored in 2006 with the President's Award for a Lifetime of Contributions to the industry.

While working for the APP, I spearheaded the production of a number of brochures for the organization that have helped to distribute information and professionalize the field. These include the Aftercare Guidelines for Facial and Body Piercings, Aftercare Guidelines for Oral Piercings, Oral Piercing Risks and Safety Measures, Jewelry for Initial Piercings, and Jewelry for Healed Piercings. I also oversaw the production of Troubleshooting for You and Your Healthcare Professional, which provides valuable information for piercees and for medical professionals, who often have no piercing-specific training. My most recent addition to the APP brochures was Preparing for Medical and Dental Procedures.

Additionally, along with a great team of other volunteers, I headed-up the rewrite and revision of the APP Procedure Manual, 2013 Edition, which is still used throughout the industry as the definitive guide for safe, sanitary piercing practices.

I undertook further volunteer duties with the APP, serving as Editor of the APP's quarterly journal, THE POINT. I produced four publications per year, from issues #17- #31. For issues #46-59, I served in the position of Co-Editor with former APP President, James Weber, and was Editor in Chief of Issue #60.

I have spoken to groups of medical professionals about body piercing, including the Association of periOperative Nurses (AORN) at their World Congress, HIV/AIDS Health Educators of Louisiana, ER staff at Tulane Hospital, Louisiana State University, and the American Urological Association. I presented a course on the safe care of patients with piercings at their 2015 conference. I have also educated both students and staff at Colleges and Universities, including Yale and Northwestern University.

I contributed to the state of Louisiana by assisting in the promulgation of the laws on body art, and also by assisting in training the health inspectors who enforce the regulations I helped to draft.

I have also participated with Doctors at the University of South Alabama in a fascinating research study, specifically about the Vertical Clitoral Hood (VCH) piercing and female sexual satisfaction!! Positive results were published in the prestigious (and conservative) American Journal of Obstetrics and Gynecology.

I am renowned throughout the industry as a pioneer and consummate professional, revered for knowledge, skill, and ethics on the job. And I feel like the luckiest human being with the best job in the world, because I retain my enjoyment and passion for piercing, even after all of these years.

In 2009, my book, The Piercing Bible: The Definitive Guide to Safe Body Piercing was published by Crossing Press, a division of Random House. It has been reprinted at least 8 times since then, is available as an eBook, and also came out in a Russian translation!

To quote body art industry trade magazine Pain Magazine (August 2003) featured artist section: "Elayne is not only credited with bringing piercing to the mainstream, she is also responsible for developing much of the industry that's now taken for granted—including tongue piercing."

I was featured in the 2003 MTV special, "A Social History of Body Piercing" in which I spoke extensively about genital and oral piercings.

Creating a new chapter in my series of "firsts" in November 2002, I became the first wearer of body art to receive a registration from the U.S. Patent and Trademark office. For details see my body art page.

My picture has appeared in a numerous books such as The Illustrated Woman and Modern Primitives. My image has also been seen in virtually every tattoo magazine known to man. I have been interviewed in many varied publications from The National Enquirer and Sun, to Rolling Stone and Us magazines. I've been interviewed on many television shows including news broadcasts like CNN, shows such as Inside Report and After Hours and various cable television shows as well. I have even been a guest in a segment about piercing on National Public Radio's "All Things Considered."

I have also received press for being the piercer to popular rock star, Lenny Kravitz. I was his friend and piercer for many years, and even went on tour with him and pierced his entire band and crew!

Additionally, but less happily, my photos have been used extensively without permission on book and album covers, and in print media ads for music CDs, computer products, cars, laser tattoo removal, and more. A photo of me was sold to Getty Images on a falsified release. My picture has been also used with my blessing at times as well.

Since 2005, I have penned the monthly "Ask Elayne Angel" Q &A column on my area of expertise for the body art industry trade publication Pain Magazine.