COVID-19 Update: I continue to offer online (photo) anatomy consultations and piercing problem consults, and also one-on-one piercer coaching.
My next tour will be in May 2023 in Detroit. See the COVID updates page for more information, and this page detailing the long-term risks of COVID infection(s).

I have amassed a collection of approximately 40 piercings since my ear lobes were first done in 1967. I use the term "approximately" because some remain open and house jewelry periodically, but not daily. In 1972 I added my first "extra" hole to my already-pierced ear. I continued to pierce myself and my friends over the years. Eventually I found Gauntlet, the world's first piercing specialty studio, where I received my first (and many subsequent) professional body piercings—and where I later ended up working.

In my left ear I have eight added holes, including four earlobe, tragus, helix, forward helix, and a 2-gauge conch piercing. The latter is my pride and joy of this ear. It was originally pierced at 10 gauge and stretched over time, which was not easily or comfortably accomplished, because cartilage is notoriously un-stretchy.

In my right ear, I've got a dozen that include tragus, daith, and helix, plus numerous lobe and cartilage piercings. If you're not sure which piercings are which, that is all covered in detail in The Piercing Bible.

I wear a septum piercing that I've had since the mid 1980s—and I must say those were extremely rare at that time, especially on women. I've had it stretched all the way up to 4 gauge, but usually wear a diminutive 18 gauge 1/4" bejeweled clicker in it nowadays, along with a few other rings in a stack. I can't help but slip a cocktail straw through my septum piercing on occasion, especially in fancy restaurants.

I have had my bindi (central forehead) piercing since the mid 1990s. I wear an 18-gauge curved bar in it. The purple ornament you see below it in the photo is a Swarovski crystal that is simply glued on with Krazy Glue—the same way I glue on my dimple gems.

My cheeks are no longer pierced and there's a whole story to that. You can find it on page 150 of The Piercing Bible, and it is entitled "The Worst Piercing Story." In case you skip reading it, let me tell you: the upshot is that I highly advise against cheek piercings beyond the first molar. If you're planning to pierce yours, read the story first!

I have a philtrum piercing (in the center above my upper lip), which I've worn since the late 1980s. As far as we're aware, it was the first of those we'd ever done! I had a lower labret that I retired many years ago.

I'm well known for my my 5 tongue piercings, which I have had for a very long time. The initial one in the center was done by Jim Ward in the 1980s and may be the first permanent tongue piercing worn in the US, as far as we know. I performed my other tongue piercings on myself. The last, and furthest back in my mouth, I did in 1990 or '91.

Additionally, I wear a navel piercing plus a considerable number of others not visible to passersby on the street. As such, we'll keep them where they are—largely unseen, and leave them up to your imagination. That said, a photo of my nine nether piercings is located somewhere on this website. If you spot it, you'll probably be able to tell that it is me. I'll say no more... (and happy hunting, should that be of interest).

Below are some historical photos including one of Jim Ward piercing my tongue, an image that shows my hand web piercing (now retired), and one that includes my horizontal eyebrow piercing (also a first—now retired), and a neck piercing that was intended to be temporary. I put it in to purposely cause a scar resembling a vampire's bite. Oh, the folly of youth! Still, it hardly scarred at all, despite all the things I intentionally did wrong. There are also new images of my ears with my current jewelry.

And, yes, it hurt! Bob is quick, but he's also famously heavy-handed. That said, he did a beautiful job and many agree that my wings have weathered the years very well.

I wore the wings as my sole tattoo for several years and in 1991 my then-husband, British tattoo artist Alex Binnie applied the custom floral/scrollwork black and purple "gloves" to my arms. The arm work was also completed in four sessions totaling about twenty-two hours of tattoo work. Each outline was done in a single four-and-a-half hour session. Each arm had a six-and-a-half hour shading session to fill in the color.

My most major work was done by Juli Moon at her former location in Seabrook, New Hampshire in 1992. I went to Juli's Bed and Breakfast tattoo studio and stayed there for a total of eleven days. I did three days of piercings in between the eight tattoo sessions it took to complete the work. The colorful mermaid scales, fins and gills that completely cover (and transform) me from waist to toes took a total of fifty-nine hours over those eight sessions. Juli has an incredibly gentle touch, but, wow! There is no black ink whatsoever in my mermaid tail. The darkest shade is a deep purple, which gives my legs a soft, shimmery look. People often mistake my tattoo for tights or leggings.

in January of 1998, Cap Szumski (RIP) of Timeless Tattoo in Atlanta, tattooed my face, but you might not notice at first glance. He put miniature purple shadow-flames directly over my natural eyebrow shape. Over time, the detail has faded and they just look like purple brows, nowadays.

On the advice of my attorney, I had the encircled "R" added to the tattoo on right buttock. It was done by Joey Galigher currently of Liberty Tattoo in Atlanta, GA. See related story below about the Trademark on my wings.

Feeling guilty about asking an artist to perform such a miniscule tattoo, I opted to also have Joey add bilateral purple flames behind my ears. My addition of these flames was intended to add a little more fire to the overall theme of the four elements. I have have plenty of "water" from the mermaid tail, a lot of "air" from the wings, a great deal of "earth" from the flowers and vines, but had only a tad bit of "fire" with the purple eyebrow flames. Though, being a Leo, (a sun sign) I already have quite a bit of "fire," if you go by such things.

In early 2006, Walt Clark in New Orleans covered my hands in a smaller version of the floral designs on my arms.

My most recent tattoo work was added in 2010, also done by Walt Clark, to celebrate my 50th birthday. It is a set of sinuous snake-like forms from my hairline to the top of each shoulder. It consists of a Mayan sun ray design to add a little more fire to my collection of the elements, and to honor the heritage of the area where I live in Mexico.

People sometimes ask me if I'm "done" or if I have more body art plans. I still retain some blank space, in case I do decide to get more. We'll just have to wait and see what new adornments the future may hold.

I also have what I refer to as "etching" on each shoulder cap. This is a form of scarification I invented, and it is done using a tattoo machine without ink, in a specific way to create a scar. Normally, of course, the machine is used to deposit ink with the intention of leaving no scarring, so this is essentially the opposite.

They're hard to photograph, but for what it's worth, here's a few images. The Fleur de Lis on my right arm was done several times using a number of different techniques. Once we got the method figured out, the palmette design on the left side was done, by Bethrah Szumski of Virtue and Vice in Atlanta, GA just once. I've had them since the turn of the century. I found it fascinating to see how the shape of the design changes along with my anatomy! 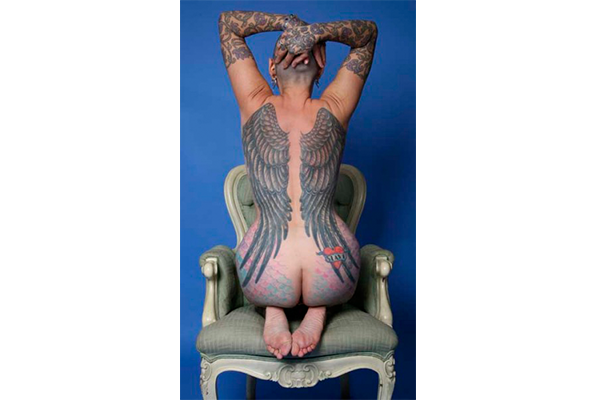 Subscribe ONLY if you wish to be informed when I set dates to pierce in Detroit!